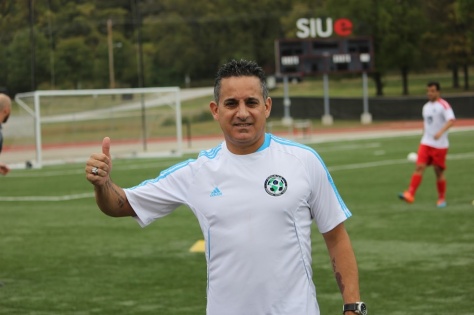 Joey Bilotta For The Win

If you’ve ever studied and trained at an EduKick Academy, then you know Joey Bilotta. Joey has spent most of his life inspiring young soccer players to excellence.
He works harder than most people on the planet to encourage, motivate and involve them in classes, sessions, and training that prepares them – not just for the soccer arena – but for life.

The Goal of EduKick Academies

As soccer, or football, is a world sport, it’s his goal, and the goal of all EduKick venues, to offer these young players a better sense of what the world is like. And while academics and soccer training are the main studies at each campus, the overall experience offered by EduKick International Football Association (EIFA) provides the opportunity for each student to develop intercultural competence.
Joey firmly believes that learning to understand, communicate with, and play alongside players and coaches from other countries and cultures gives these students an edge over most other players.

With that edge comes a better awareness of who they are – individually – and what their place is in the international world of soccer. While some, like Duncan McCormick and David Somma, have gone on to professional careers, others have chosen to coach, teach, and work in the administrative side of the soccer world.
Whatever their place, these student-players – alumni of EduKick Academies – continue to develop in the sport they love so much.
And a good deal of this deeply embedded sense of purpose is owed to our own Joey Bilotta.

EduKick Manchester is proud to announce that last month, one of our former players and students Christian Cantero, was chosen to play for his national side, Puerto Rico in a friendly with Canada in Bayamon.
Christian spent two years with the EduKick Manchester program, proving himself to be one of the most committed players while he was there.

Christian did very well in his schooling and returned the following year to the UK (with our partner college Myerscough) to earn his degree in sports coaching. He played with a local team in order to keep up his football training.

Soon after Christian returned home and started playing again, national selectors noticed him. The game against Canada was a great achievement for Christian, representing his home country in the game he loves.

On sharing this great news with EduKick Christian said: “This one goes for you and what I’ve learned through you guys.” 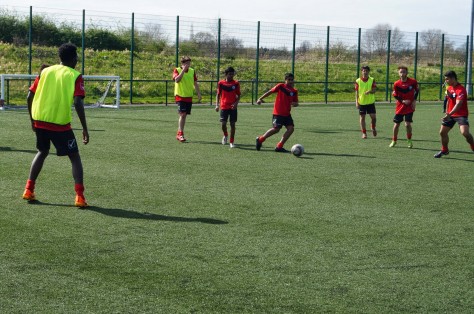 “This is a fantastic example of what can be achieved if a player works hard, and that its hard work and commitment that can get you there.” – Edukick Manchester Director Mick Brennan 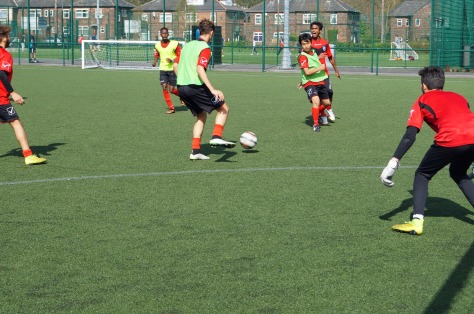 Take the next step toward your soccer future! 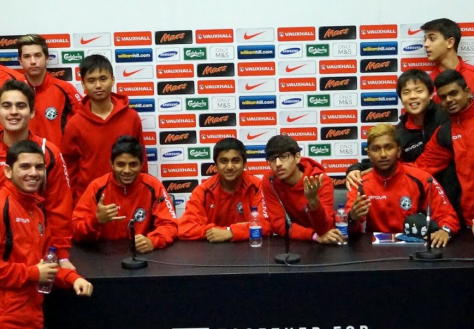 We recently had to say goodbye to Gurav who is heading to India to progress his career in the game.
Gurav Jagtap, from India joined Edukick Manchester BTEC football program, in September 2014, to gain experience learn the English way to play. A great member of the team, he’s been focused, consistent and brought talent on the field.
He left to attend a trial with one of the Indian I League teams, and will continue his playing career back home.

“I have gained more knowledge about my position in midfield in my time here in Manchester and have improved a great deal, learned to play in the different conditions in the country both the weather and the physicality of the game.” said the young player. “I’ve enjoyed the culture and the whole experience and have made some great new friends whist I’ve been here, I’ve loved every minute of my time here, I’ll miss England.”

All the staff and players wish Gurava all the best for the future, he will be missed this season on the program, but look out for him soon in the EduKick Manchester success stories as he tried to break into the Indian I-league!
[youtube https://www.youtube.com/watch?v=cR46P3ZJ7YU?rel=0&w=560&h=315]
His quote last fall about coming to EduKick Manchester proves true.

My aim is to play for my nation and to achieve a good level in a big club as a professional soccer player. I am very passionate about my game and want to just be a footballer. I believe that Edukick can support me to be a professional football player.

Good luck in all you do, Guarav! 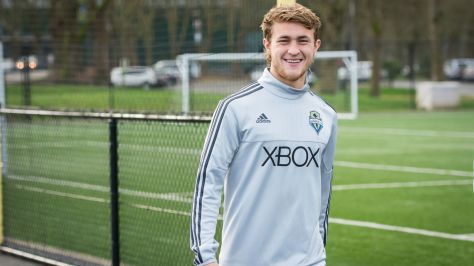 Duncan McCormick, from Seattle, Washington, spent the 2010/11 season at the EduKick Madrid Academy and is now one of the first two players chosen for the Sounders 2 inaugural season in the USL.

“It’s good to be a part of this program, especially in the first year,” said McCormick. “I see a ton of positive things coming along and it’s going to be a great stepping stone to get to the First Team. I wasn’t ready to make that jump from the Academy right away, but this allows me to do my business with S2 to hopefully make the move eventually.”

At the age of 19, McCormick has started all 29 games for the Academy U-18 side in the 2013-2014 US Soccer Development Academy season. He also scored a total of seven goals season and helped his team to the top with 1st place in the USSDA Western Conference. 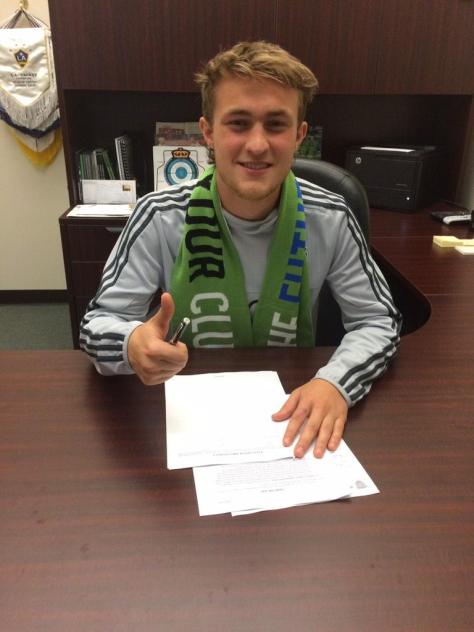 Duncan tweeted this image shortly after signing on.

“Signing the team’s first two players is a momentous occasion,” said S2 General Manager Andrew Opatkiewicz about Duncan and his new teammate Amadou Sanyang. “Duncan and Amadou represent some of the key building blocks of S2. Duncan is a young Academy product who’s a total team guy and has a lot of upside.”

McCormick, during his time at EduKick Madrid, had the opportunity to play for Spanish Third Division side Colemenar Viejo.

“My time spent with EduKick Madrid made me a much more well-rounded player and person on and off the field.” McCormick told EduKick. “I give much of the credit for my recent success to those who in Madrid who helped me develop my skills. Training at an elite level everyday in Madrid has prepared me for the future, and it couldn’t have been with a better group people.”

Get your FREE information here! 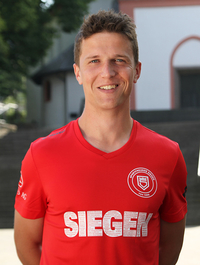 Every season, it seems we discover more EduKick grads finding their way into professional soccer. Today, it’s Charlie Butte of Belmont, Massachusetts.
Charlie, age 22, is an American who trained at EduKick Madrid in the 2010/2011 academic year.
He returned to the USA to play for Iona College in New York. After several trials in Germany, he recently signed for Sportfreunde Siegen.

I am very excited about the opportunity to work in the EduKick environment, and I am very keen to share my unique experience with the young Edukick Manchester participants, as a former participant, and hopefully become a role model for them.
I am enjoying my Degree course very much, and I hope to contribute a lot to Football. I have pure passion for coaching and it fits very well with my degree course. Also, the work experience will considerably help my development. – Joao Pereira

During this period Joao became an important part of the squad playing in matches against English professional club academy teams while studying toward a BTEC Sports Science Diploma and completing his English FA level 1 coaching program.
The Sports Science Program and Coaching Course sparked interest in Joao so much that when he returned to Angola, where he continued to study Sports Science.

Now, back in the UK, he is studying a Sport and Exercise Science BSc(Hons) Programme at Manchester Metropolitan University, for the MMU-CHESHIRE Campus based in Crewe, UK. The main focus areas of the Degree program are Psychology, Biomechanics and Physiology.

It was great to meet Joao again and to see how well he has been developing his career.
We are delighted to have him with us – this time on the staff side – and hope he can benefit tremendously from the work experience, as well as offer our participants his knowledge and experience.
One of our goals when participants arrive is to work with them to define a career path that includes academics, in case that dream of becoming a professional player does not happen. We know that can be very difficult and only happens for a small percentage of players.
[youtube http://www.youtube.com/watch?v=9pQk8c60ElE&w=560&h=315]
So it is great to have Joao with us as a shining example of how you can have a career built around sports, if you make the right decisions regarding your career path and include academics. – Mick Brennan Edukick England Academy Manager

Joao has continued his coaching education and will be started his English FA Level 2 Program shortly.
Joao will be spending April & May visiting the current EduKick Manchester program twice per week to assist our staff both in the classroom and on the pitch.
This will help him to gain valuable work experience with an option to return for the full 2014/15 season to become part of the EduKick Manchester support staff.
Ready to take your soccer playing to the next level?
Then training with EduKick Manchester may be the right fit for you!